Read the full story from The Denver Post here.

If you’ve been to Steamboat Springs anytime in the last three years, there’s a good chance you’ve seen him: Skiing Jesus.

Walking up and down Oak Street, whether to grab a bite at Yampa Valley Kitchen or a cup of coffee at MountainBrew, your eyes will almost certainly be drawn to the gorgeous, tall church with stained glass windows that spans most of the block between 5th and 6th streets.

There, in the windows of Holy Name Catholic Church, is Jesus rising above the slopes of Steamboat Ski Resort. There are several long, narrow rays of light emanating from behind him, including two just below his feet.

Look more closely and you’ll see a cast of Steamboat characters on bended knee — a reference to Philippians 2:10-11, which says that “at the name of Jesus, every knee should bow.” There’s a cowboy and his horse, a border collie, a cyclist, a skier, a snowboarder, children, elderly folks — people you might meet at Sunday mass here. The Yampa River runs through the scene, too, and there’s a hot air balloon, a nod to Steamboat’s annual festival.

“Everybody likes that one — that’s kind of a contemporary window,” said Diane Franklin, a long-time Holy Name parishioner who now lives in Texas. “And a lot of people call it the Skiing Jesus. Jesus is coming down from heaven to speak to the people, and everybody is standing there with bent knees, listening to Jesus and praying. The two rays on the bottom kind of look like he’s got skis on and, because it depicts the ski mountain, it looks like he’s coming down to ski.”

OK, so the windows aren’t really depicting Jesus shredding some fresh champagne powder. In reality, they show the second coming of Christ to the Yampa Valley at the end of time.

But, beyond the purely religious and spiritual meaning, the windows are a direct reflection of the diverse and eclectic community this church serves and they help add modern-day context to scripture, church leaders say. They’re a symbol that all are welcome here, whether simply to observe these stunning works of art or to begin — or restart — a religious journey.

“One of the values of church architecture and church art is that it emerges from the culture of the people, right there and then,” said Father Ernest Bayer, who has served as Holy Name’s pastor for the last 15 years. “There are paintings from the Middle Ages of the birth of Jesus with church steeples in the background. They have taken the stories and put them into the Middle Ages to make them relevant to that time and place. (The scripture is) still living and still alive and still relevant.”

Though “Skiing Jesus” is one of the more eye-catching stained glass window scenes at Holy Name, it’s just one piece of a much larger collaborative stained glass project that brought together dozens of community members, both Catholic and not.

In 2012, crews began a $9 million renovation and expansion project to more than double Holy Name’s capacity.

Rather than install regular windows throughout the new building, church members began mulling the idea of using stained glass instead.

There was just one problem: The price tag. According to one estimate, it would cost something like $3 million to buy and install stained glass windows throughout the entire church, now more than 15,000 square feet.

Instead of giving up, they looked inward and leaned on the talented members of the congregation.

To sketch out and design the window scenes, they called on Greg Effinger, a long-time parishioner and Steamboat artist specializing in graphic design, watercolor art and oil painting, among other mediums. And to bring Effinger’s designs to life in glass, they tapped artist Georgian Kalow, another church member who taught stained glass classes for many years at Colorado Mountain College.

Guided by Bayer’s ideas for various religious scenes and themes, Effinger got to work sketching out the windows on paper, then finalizing their design on his computer using Adobe Illustrator.

After gathering feedback from church members and making some tweaks here and there, Effinger printed life-size versions of each window. Other scenes and people depicted in the church’s windows include the baptism of Jesus, the transfiguration of Christ, the last supper, Our Lady of Guadalupe, the tree of life, the creation story and several Bible verses.

Led by Kalow, a team of 25 to 50 volunteers — some church members, some not — began the painstaking process of cutting and assembling each piece of glass needed to create Effinger’s designs. Working in the church basement, they patiently cut and soldered together some 24,000 pieces of glass to create more than 160 windows.

From design to installation, the stained glass project was a true labor of love that united members of the Steamboat community over a period of about four years, Bayer said.

“People from all over town helped out; it wasn’t just Catholics,” he said. “It was a homegrown project for sure.”

Instead of $3 million, the stained glass windows cost only $600,000, thanks to the countless volunteer hours. The church paid for the window project by encouraging parishioners to make a donation to memorialize a particular window or a scene.

The windows — and the new church itself, built primarily with stone — are meant to last for decades to come. They’ll serve as a lasting legacy for Holy Name and the many people who came together to make the stained glass windows a reality.

“When we first approached the archbishop, he said, ‘OK, go ahead and build the church, but build it as big as you can and build it for 100 years,’ so that’s what we did,” said Franklin, who helped lead the expansion project.

Though coronavirus has made in-person gatherings more challenging, the church is still open for mass and for drop-in looky-loos who want to see the colorful windows up close. (If someone is available when you stop by, they’ll even take you on a tour.) The church is also part of the Steamboat Springs First Friday artwalk, though those events are being held mostly online because of the coronavirus pandemic.

Whether you’re religious or not, the church’s stained glass windows are impressive works of art plain and simple, and a piece of Steamboat’s identity.

“The church has always been a patron of the arts,” Bayer said. “Glass is an especially miraculous medium because it doesn’t look like anything until there’s light shining through it. It’s like the light of God penetrates this medium and it becomes filled with glory and beauty and significance and revelation.”

Though the stained glass project wrapped up in 2017, Effinger still finds himself gazing up at the windows when he attends mass each Sunday and on some weekdays. At first, all he noticed were the tiny mistakes and imperfections that only the artist who designed the windows would recognize.

But, over time, his focus shifted and he began to bask in the colors, the ever-changing light and shadows and the meaning of each scene. Undoubtedly, the stained glass windows helped deepen Effinger’s faith — and he hopes they’ll do the same for others.

“People always say, ‘Oh, gosh, that church is so pretty I wish I could go in,’” he said. “It’s open to everybody, it doesn’t matter what your faith is. And do yourself a favor, go look at the church at night and maybe accidentally sit through a mass.”

What's on your mind? Cancel reply 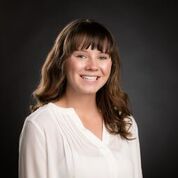 Madison joined Eidos in September 2019 with a background in journalism, public relations, and social media strategy. She recently graduated from Michigan State University and moved from Michigan to Colorado in order to live and learn in a new place she can call home. She holds storytelling near and dear to her heart and is excited to share Eidos' success stories.